Damaged firefighting equipment, recovered from the ruins of the World Trade Center, on display at the NYC Fire Museum 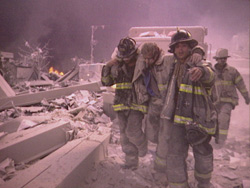 We had already begun the process of forming Eureka Foundation and carrying out the business plan for GREAT MUSEUMS when 9/11 happened. After some discussion, we decided to consider the NYC Fire Museum, located in an old fire house on Spring Street in Soho, as one of the nine new programs being created for the first season of GREAT MUSEUMS on Public Television. After visiting the museum, we decided to move this program to the head of the production line, so that it could be shown on or around the first anniversary of the tragedy, which is, in fact, how it turned out.

The main reason for moving this episode up was our perception that there would be tremendous viewer interest, not only in New York, but around the country. Feelings were still very raw at the time, and this museum’s story was a heart-wrenching focal point. In fact, I found it almost impossible to tour the museum during filming—the feelings evoked were so powerful—it was impossible not to be in tears (welling up again as I write this). A great story without 9/11, hugely moving considering 9/11. 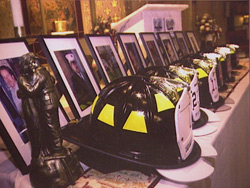 I’m proud that we told the story of this small, unassuming museum. In honor of all who died and suffered on 9/11, and most especially in honor of our firefighters, I hope you will visit GREAT MUSEUMS’ YouTube Channel or the sites of our online partners, Hulu or Snag Films, to watch (or re-watch) “Trial By Fire: The New York City Fire Museum.”

-Michael D. McCarthy
Founder, the Eureka Foundation and resident of New York City for over 25 years